Packet Capture of Heartbleed in Action

As many are aware (as it’s now become national news), a vulnerability was recently discovered in OpenSSL dubbed Heartbleed. The attack centers around the implementation of the Heartbeat extension in OpenSSL which causes a server to return the contents of memory that should be protected. This blogpost by Troy Hunt describes the vulnerability in detail: Everything you need to know about the Heartbleed SSL bug.

You can view the Encrypted packet capture of the attack in CloudShark here:

You can view a Decrypted packet capture of the attack in CloudShark here:

We’ve included our analysis in the packet annotations.

Now examine how the server responds to this message. In the Heartbeat response the server must return the message that it received in the request. Our server is responding with a Heartbeat payload with 1021 bytes in it. We said we were going to send 1021 bytes but our message was actually smaller. What is the server sending to make up for the difference?

When you examine the decrypted SSL record our server sent you can see that it responded with the payload we sent, plus the HTTP headers from a user that logged in completely independent of this SSL session. This includes the login and password that was used to login and the session id! In this case we can see that the admin user is logging in with the default cloudshark password. 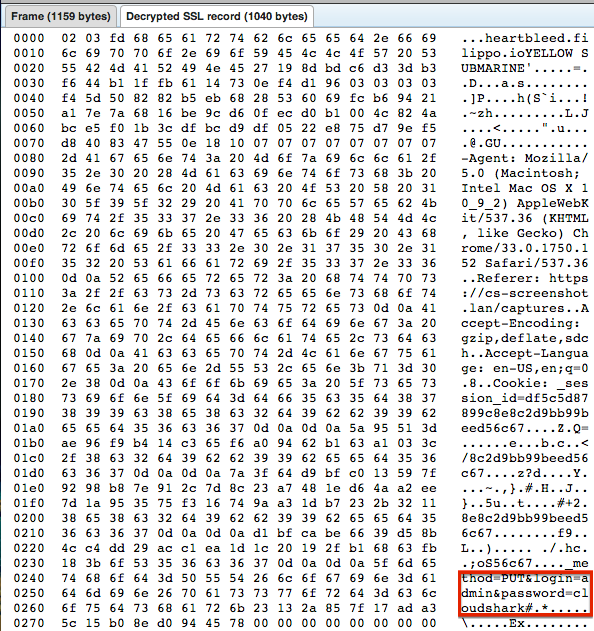 That’s all there is to it. We figured people might be interested in seeing an actual capture of the issue and the attack.

Want articles like this delievered right to your inbox?