The most well understood case for product testing is in quality assurance while a home networking product is in development, or testing its integrity between firmware revisions. But testing before, during, and after deployment can also ensure that service providers reduce costly support calls and truck rolls.

We asked some of our customers, some in the service provider world and others who develop management and support services for service providers, what the most common causes of service calls are. Here are the three biggest ones that came up, and how you can ensure through testing that your broadband products are up to par to reduce those calls.

The most common problem among residential broadband customers centers around the myriad of issues that can come up with WiFi networks. While some of them are related to underlying interoperability issues between WiFi endpoints, many of them are problems with protocol functionality such as DHCP, NAT, etc. It’s also often a problem with the users’ basic configuration setup - things that can be solved remotely using a management protocol like TR-069.

Whatever the problem, the end user isn’t likely to know the difference! For these reasons it’s critically important that you test the end-to-end functionality of your home networking equipment, particularly if it is a home gateway with WiFi or a WiFi access point.

CDRouter has numerous test cases that simulate LAN hosts connecting to the WiFi network, and their ability to reach the WAN reliably. In addition, setting up a TR-069 WiFi setup test case is easy using TR-069 scenario testing - you can script your own TR-069 scenario to configure a device’s Wifi network, then use CDRouter’s test scripting capabilities to ensure that the Wifi network was set up and activated correctly.

Video is the most intense use of subscriber broadband, putting heavy demands on not only the service provider but over the top video providers as well. When there’s a problem, the customer doesn’t care who’s fault it is, they just want it to work. 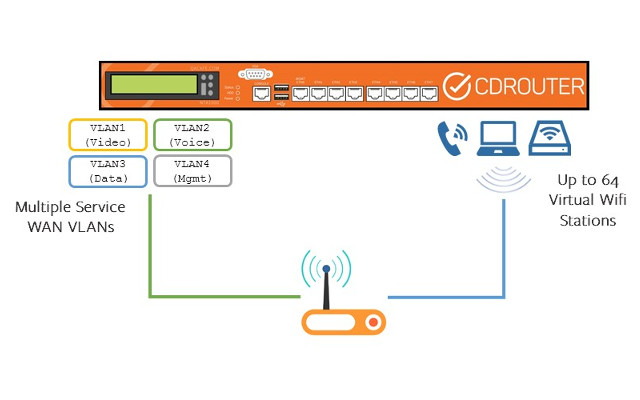 While performing video quality testing on actual video streams can be done (and there are a host of tools available), measuring “quality of experience” is nebulous. Often, video quality is a bandwidth issue or a direct result of protocol level problems with regards to QoS, routing, TCP or NAT. Again, end-to-end testing can relieve customer support pressure by guaranteeing that the home gateway can adequately manage the protocols required to deliver high-quality video.

This includes testing multiple data paths in a multi-service gateway, such as the testing that can be performed using CDRouter Multiport in a multi-service test setup. These test cases ensure that data that is assigned to specific VLANs or other data channels travel along the path they are assigned and follow the QoS rules that are assigned.

Still common was the ability for the device to reliably connect to the service provider’s network, particularly after power loss or reboot of the device. This is critcal, because unless the device has WAN failover capability (which can also be tested by CDRouter Multiport), a service call is almost inevitable.

Testing end-to-end functionality in this case involves testing the basic connectivity protocols that service providers may use, including PPPoE, DHCP, etc., as well as the host of connection schemes involved in IPv6 or hybrid IPv4/IPv6 deployments, and testing not just basic connectivity but rigorous connection capabilities in the event of a device reboot, power loss, or loss of connectivity to the edge router.

In addition, problems with basic internet protocols, especially when done over NAT, will appear to the user as connectivity loss. Being unable to reach a web page because of DNS issues, for example, simply seems to the end user as if “the Internet connection is down”. Performing a comprehensive test of all of the protocols necessary to deliver the end user’s experience is the best way to ensure that they won’t come calling later with problems stemming from basic functionality of their home gateway.

Curious if we test the protocols that cause the most problems for your networks? Take a look at CDRouter’s test case summaries.